What does the gospel have to do with physics?

There are at least one hundred billion stars in the Milky Way galaxy. [1] It would take you – at the speed of light – 100,000 years to cross from one side to the other. [2] By my calculations, that’s 968 trillion years of motorway driving at the national speed limit. Once you get to the end of our home galaxy, you’ve got approximately two trillion other galaxies in the known universe to explore. [3] And the known universe is, well, only the known universe - about 5% of the whole thing. [4]

Stargazing is one thing. Stargazing while knowing these kinds of stats is another.

So, shout out to those of you studying physics at university – you get it. You get that using experiments and equations to comprehend the detail of what you’re seeing (and the physical realities you can’t see) brings you a whole new level of ‘wow’. Physics turns passive wonder at the world into active exploration, often fuelling us with even greater wonder and even more to explore.

Nice. But what has this got to do with the gospel? How do we get from ‘ooooh pretty stars’ to ‘Jesus Christ died for you to be forgiven and rose to give you everlasting life’? How does faith fit in when we’re knee-deep in differential equations instead of gazing through a telescope?

'For since the creation of the world God’s invisible qualities – his eternal power and divine nature – have been clearly seen, being understood from what has been made…'
Romans 1:20 (NIV)

In other words, as a Physics student, everything you’re studying is revealing something of the One who made it. (Yes, even that dull thermodynamics module.) Even if we can’t ‘see’ dark matter or ‘understand’ what a wave function collapse really is, the beauty, vastness and mathematical elegance of the physical world helps us ‘see’ and ‘understand’ that it is “shot through with signs of mind” .

Paul gets a bit more specific than that, though. The world we study in physics doesn’t only suggest that a supernatural being exists. He says it reveals with clarity a God who has specific qualities - powerful, eternal, divine.

I probably don’t know you, but if I were to scroll through your Instagram feed, I would see something of your personality. The way you design your stories or caption your photos reveals something of who you are to the world. I could get a sense of whether you’re thoughtful, artsy, fun; whether you value experiences, people, interior design, politics, fitness or nature. I still wouldn’t really know you, but I would have seen something of you. How you design your online presence is part of how you communicate who you are to the world. In the same way, how God designs the physical realm is part of how he reveals himself to us.

Back to Romans 1:20. The theology police among you will notice I cheekily quoted just the start of the verse.

Are you ready for the punchline?

“For since the creation of the world God’s invisible qualities – his eternal power and divine nature – have been clearly seen, being understood from what has been made…

That means we are without excuse when we choose not to see him in it. Ouch.

If we zoom out in Romans 1 to see the context, Paul’s talking about the fatal mistake of treating created things like gods instead of the Creator. “What can be known about God is plain to them” (v19) but they “suppress the truth” (v18). “Although they knew God, they neither glorified him as God nor gave thanks to him, but their thinking became futile and their foolish hearts were darkened” (v21).

In our lectures and labs, when we see or learn something mind blowing, we should go ‘wow, God’. Too often, we’re content with ‘wow, physics’.

When we take the Creator out of our study of creation, we’re doing the classic Eve thing and choosing to prize knowledge (of good and evil) above relationship with God. In modern science, God is often ignored and physics itself is elevated to a god-like status. It can lead us to believe that physics will one day answer all the questions, solve all the problems, and give us hope and purpose by improving and prolonging the existence of humanity with technological development.

Making physics into a god is not only sinful but deeply sad. If the physical world is all there is, then the wonder and awe that inspired us to study it ultimately means nothing. The world might feel beautiful and significant, but entropy tells us it will all tend to disorder and we’ll return to dust. We might improve and prolong the existence of humanity, but for what purpose? What are we living for?

Physics leaves us longing for more

In case you didn’t know this, you are not your Instagram feed and God is not creation. Your physics lecturers don’t have a monopoly on what’s real and knowable because the physical world is not the full extent of reality. It is meant to be a taster, a signpost to something else – and why would we be satisfied with just studying a signpost?

So, this is one way of thinking about physics and the gospel: Physics speaks of a Creator, our relationship with it speaks of our rebellion, and we are left with an appetite for the rest of the story. For that, we need God to reveal himself more explicitly.

Good job he has, then.

We see in physics that God exists, and we see in Scripture what he’s like. God is so keen for us to know who He is that he has gifted us with both his works and his word - check out Psalm 19 to see David celebrating that wonderful combo. In scripture, we meet Jesus for ourselves: the God who became part of his creation in order to rescue it.

My prayer is that that you and your friends/lab partners/tutor groups get a glimpse of God as you study his world this year, and that it fuels a curiosity that draws you to see Jesus more fully in his word.

Take a recent lecture topic – where do you see God in it? (He’ll be there somewhere, even if it’s electronics). Could you take a post-it note to your next lecture and keep an ear out for how God’s revealing his eternal power and divine nature through what you’re learning about?

How much can we conclude about the character of God from studying physics? To what extent can we use nature to discover theological truth?

Were the laws of physics influenced by the fall, or just our relationship to them?

If the whole creation is longing for redemption (Romans 8:22-23), what could physics be like in the new creation? Does the Bible give any hints on how the physical world will be different? Will we continue to study in heaven as a form of worship?

If physics can tell us something of God but leaves us with “an appetite for the rest of the story”, how could you help physics friends to see that? What questions could you ask to take conversations deeper and find out what they think about God?

Resources to check out

Physics and Philosophy: The Revolution in Modern Science, Werner Heisenberg

[5] See e.g. this article by physicist Tom McLeish for more on this!

The cross, the tomb, and the scientist 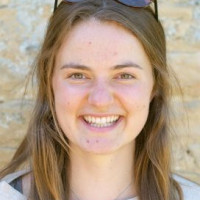 Naomi studied a Masters in Physics at Durham University, dabbled in Theology and Philosophy for a year of training with OCCA The Oxford Centre for Christian Apologetics, then returned to Durham as a …

View all resources by Naomi Brehm