You've arrived at uni. Freshers' week is over, and the cycle of lectures, practicals and problem sheets is just getting started. It's an exciting time, but somehow it seems like everyone else is finding your course much easier than you are. Feelings of inadequacy and self-doubt quickly creep in. As Christians, how do we handle the pressure to always be comparing ourselves to others? Drawing on her own experience of starting uni, Relay worker Katie shares how it's possible to not only survive, but thrive in your first term.

My arrival to university in October 2015 was, for me, marked by three main feelings:

1.    Wanting to find some Christian friends

2.    My overwhelming desire to tell anyone within earshot about my gap year

3.    The sense of my complete inadequacy to study Geology at Imperial College London

While the first two of those feelings were respectively fulfilled and subdued (apparently my tales of Machu Picchu at sunrise aren’t what make me an interesting person), the third one really stuck. I was studying a subject of which I had no prior experience, among students who had studied it for GCSE and A-Level. From the start, I felt like I was already behind. My deepest fear was that I didn’t deserve to be there and that I’d be exposed as a fraud. I did, after all, have to confess to my tutor that I didn’t actually know what the rock cycle was and was almost convinced that I’d been enrolled in the college only by an administrative error.

I didn’t have a name for it at the time, but imposter syndrome describes my experience well. Had I thought to voice my anxieties, I would have been comforted by the many others who feel similar things at university. But instead I listened to the inner thoughts that told me I was only worth what I achieved in my degree. I thought it was impossible that I would ever get top grades, so what was the point in trying? I studied less for my degree and filled my time doing all I could with the Christian Union. But rather than serving God, I was still seeking the approval and acceptance of others.

A turning point for me was after a CU prayer meeting. While chatting to a friend I mentioned how I felt like I didn’t care about my degree and just wanted to do CU things all the time. He replied simply: “Yeah, but you get to study God’s creation, so that’s cool”. It was such a small thing to say but a massive penny-drop moment for me.

What a privilege we have, as scientists, to study the world that God has made for us. Psalm 95 tells us that:

‘In his hand are the depths of the earth, and the mountain peaks belong to him. The sea is his, for he made it, And his hands formed the dry land.’ (Psalm 95:4-5)

Who can stare up at the stars or down a microscope and not think “Wow, what a Creator”? From this point onwards, studying began to make sense to me. I realised that, as Christians, our studies are a gift from God. His world amazes and fascinates me and the more I know about it, the more I can worship Him. As we use our gifts as God intends, He is glorified.

So, to get to the question, how do you survive your first term of a science degree as a Christian?

First, remember that comparison is a thief of joy (shout out to my CU Staff Worker who said these exact words to me). Comparing yourself to the people around you will only ever accentuate the ugliness of the sin in your own heart. We either feel jealous of their success or self-righteous in our own achievements, and neither of those things are helpful or holy.

I was so lucky to be around many Christians at uni who were hardworking and faithful both in both their studies and in CU (and showed me that you don’t have to choose between them). One of the best things you can do in your time at uni is get stuck into the CU, as well as church, and be surrounded by Christians who will encourage you in your studies and your evangelism!

God has given us brains to study, so work hard. I cringe when I think of the apathy with which I approached my first year at uni, and it probably wasn’t a good witness to my course-mates. Thankfully, God works through sinful and even lazy people – his power is made perfect in our weakness. Remember also to rest – we need sleep, and we aren’t glorifying God more by pulling an all-nighter!

As you study, know that your value is not defined by your grades or by others’ opinions of you, but that you are given worth by being called a child of God! Worship God as you study his creation ‘and whatever you do… do it all in the name of the Lord Jesus, giving thanks to God the Father through him’ (Colossians 3:17). 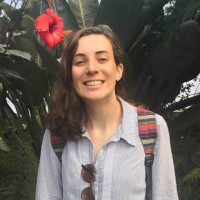 Katie studied geology at Imperial College London with an MSci in planetary science. She now works as a Relay Worker with UCL Christian Union, helping students share the gospel while at university.

View all resources by Katie Rhodes