For most of my life, one of my personal highlights of September was buying new stationery. Last-day-of-summer trips to WHSmith to browse colouring pencils in shiny tins, which would start life with pristine points but end the year as a jumble of worn-down nubs with broken leads. Or as an undergrad, carrying piles of lever arch folders back to my uni flat, a different colour for each module, and borrowing a friend’s label-maker to mark each one with my name and college.

These days, working mostly from my laptop, my stationery is much less inspiring. I’ve even (with some reluctance) recently abandoned my paper diary and turned to Google Calendar for my scheduling, reducing my September stationery shop to ordering a few new pens and some printer ink online.

Convenient though cloud working is, I miss paper. Each new exercise book, pages off-white and crisp, held the promise that by the end of the year it (and hopefully my brain) would be packed with new knowledge. Each new blank diary set abuzz all the hopes and dreams for the year to come: the classes I’d attend, the extracurriculars I’d fit around them, the friends I’d schedule time with, the internship that would fill my summer…

All of us have hopes and dreams at the start of a new academic year. Whether (like me) you love a colour-coded planner or not, there’ll be goals you’re hoping to achieve in the year ahead, aspirations you’re hoping will come to fruition.

Perhaps it’s to land the competitive internship next summer. Perhaps it’s to graduate with a first. Perhaps you’re starting uni for the first time, and just passing your first year and making a couple of friends along the way would be enough.

We all have ambitions for the year ahead, but as Christians we’re often reluctant to describe ourselves as ‘ambitious’. We tend to associate ambition with the ‘selfish ambition’ and ‘vain conceit’ Paul denounces in Philippians 3 – the opposite of humility. Does that mean that having ambitions is anti-humble?

I’ve recently been enjoying Emma Ineson’s book ‘Ambition: What Jesus Said About Power, Success and Counting Stuff’, which deals with this very question. It’s aimed at Christian leaders in particular, but I’d recommend it to anyone who’d consider themselves ambitious! In the book, Ineson helpfully distinguishes between two types of ambition mentioned in the New Testament.

As we’ve seen already, there is a negative kind of ambition which the Bible condemns. We might call this ‘selfish ambition’ (Greek: eritheia), and it comes up again in James 3:14, where it’s listed next to ‘bitter envy’. It’s a kind of ambition that’s all about seeking one’s own gain, and it clearly should have no place in our CUs and churches. Selfish ambition is the opposite of the attitude of Christ, who ‘being in very nature God… made himself nothing’ (Phil 2:6-7).

But there’s also another kind of ambition mentioned in the epistles. Paul writes in Romans 15 that ‘it has always been [his] ambition to preach the gospel where Christ was not known’. The same Greek word (philotimeomai) is used in a positive sense in 2 Corinthians 5: ‘we make it our ambition to be pleasing to him’ (my translation), and 1 Thessalonians 4: ‘make it your ambition to live a quiet life’.

So clearly ambition is not out of bounds for Christians. Paul is ambitious! You could even describe Jesus himself as ambitious: surely redeeming the whole world from the power of sin is a pretty ambitious endeavour?

What counts when it comes to our ambitions, writes Ineson, is our motivation. Does our ambition come out of a desire for personal gain, or ‘a desire to serve others, to seek the kingdom… undergirded by appropriate humility’ (p43)?

It’s a big challenge, isn’t it? Personally, I know I fall into the first kind of ambition all too often. Running the Science Network, I have a job which is explicitly about serving students, and demonstrating how science fits into God’s kingdom – but even then I find myself too often serving self and seeking a kingdom of my own. I’ve been pretty convicted as I’ve made my way through the book!

But what about you? How does godly ambition – ambition that is marked by humility and aims to serve others and seek God’s kingdom – fit into a science degree? It’s not always obvious how writing up a lab report or sitting in a lecture serves others or contributes to God’s kingdom.

But perhaps we can take a look at the bigger picture. Science is commissioned by God as part of the way we’re to relate to the world. It leads us to praise and wonder at our Creator.  It helps make life better for people in a fallen world. And it points forward to our ultimate future redemption. Doing science is a good thing.

Which means it’s a good thing to want to succeed in a science degree. Not always but often, the scientists who do really well at university will be the ones who go on to work in top institutions, produce top-quality research, and have a significant impact. Others who get exceptional results in their exams will leave the lab, but find doors open to them which are closed to others, into high-powered jobs where Christians can have a huge positive influence. And of course, those who work hard in their degrees generally have the best understanding of their subject, and the greatest appreciation for the way God has made things to be!

Most likely our motives are mixed, and that’s why it’s so important to check ourselves and our motivations as we embark upon a new academic year. It’s not wrong to have ambitions (it’s actually godly to seek to make the most of what God has given us!) but ambitions become wrong when they’re all about serving ourselves. In contrast, redeemed ambition seeks to love, serve, bless and submit to God, and longs that our success would glorify Him, not ourselves.

As you consider how you’ll spend your time this term, whether you’re working with a shiny new paper diary or good old Google Calendar, you’ll be aware of your ambitions and goals for the year ahead. Test those ambitions. Ask whether your hopes and dreams for the year are more about serving yourself or serving God. And then, whatever assignments or exams or job applications you have to do, go and ‘work at it with all your heart, as working for the Lord’ (Col 3:23). Sounds like a good ambition to me.

How can I glorify God as a scientist?

Put away your Christian calculator 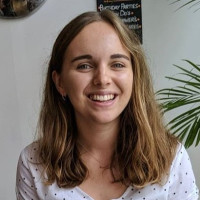 Emma is UCCF's Science Network Coordinator. She lives in Cambridge, where she studied Natural Sciences (specialising in Biochemistry), then stayed on as a Relay worker with the Cambridge Christian …

View all resources by Emma Penwright