What does the gospel have to do with mathematics?

“What do you study?”

“What do you study?”

Those are two common conversations when sharing what course you study as a mathematics student. I wonder if they sound familiar. I think maths is a bit like Marmite: you either love it or you don’t. But unlike Marmite, many of us flit between the two (often in a short period of time...)

As a mathematician, it can sometimes be difficult to see the purpose in our studies. Maths can feel very abstract, disconnected from the real world we live in. Unlike other subjects, the application of what we learn often feels like an afterthought tagged onto the end of the lecture, or even better - saved for a question in an exam.

As well as being disconnected from the real world, our maths can feel disconnected from our faith. As followers of Jesus, what are we to do with the multiplicity of emotions we feel when doing maths? Might they have something to teach us?

As Christians, we believe that the gospel of Jesus is good news for all areas of our lives. And so as mathematicians we can ask the question: what does the gospel have to do with mathematics?

Maths shows us something of God

We study maths because we love it. We love the simple yet complex nature of it. We love the feeling when the penny finally drops and we get our head around a concept. We love it when we get to the end of a proof and can write ‘Q.E.D’.

But what are we to do with those feelings?

Let’s look at what Scripture tells us.

'The Son is the image of the invisible God, the firstborn over all creation.  For in him all things were created: things in heaven and on earth, visible and invisible, whether thrones or powers or rulers or authorities; all things have been created through him and for him.  He is before all things, and in him all things hold together. And he is the head of the body, the church; he is the beginning and the firstborn from among the dead, so that in everything he might have the supremacy. For God was pleased to have all his fullness dwell in him, and through him to reconcile to himself all things, whether things on earth or things in heaven, by making peace through his blood, shed on the cross.'
Colossians 1:15-20

But maths is hard, and we don’t always have the high of things going well. So, what should we do when we are finding the problems tricky? What can we learn about the gospel when maths is hard?

Have you ever been at your desk, and you just can’t seem to get the algebra to work? The vector calculus is just too confusing? Or you try to tackle a set of problems and you look at the first question with no idea where to start. So, you move onto the second question - no clue there either. And the third and fourth are just the same.

Understanding mathematics is hard work. Nobody knows this better than mathematicians. Hours and hours can be spent on one problem and weeks and weeks spent trying to understand a new concept. This is part of the fun, but can also be deeply frustrating. We want to understand, we want to be able to solve the problem, but it’s confusing.

But the reality is that God is not like us. We are created and fallen human beings who struggle in our work and in our maths. As finite beings, we struggle to get our minds around concepts like infinity - but our God is not like us. He is infinite and so doesn’t struggle or toil to understand maths. Maths is His.

So, our frustration when faced with the difficulty of maths should point us to our broken finite nature, and to our infinite God. Next time you are stuck in a problem or struggling with a concept, thank God that He is not like us, and thank Him for His grace by which we can do any maths at all.

We often struggle with maths, but deep down it’s often why we like maths. We love the thrill of the chase, hunting for the answers. We love the satisfaction of getting to the solution.

But it’s easy for us to allow the pleasure when we get the result to turn into smugness or pride that we solved the problem before our peers: feelings of self-worship rather than worship of God. These feelings aren’t unique to mathematicians but are at the core of the rebellion of the human heart. When we use our achievements, like completing that hard proof or understanding the next theorem in the module, to worship ourselves rather than worshiping God, we are revealing the nature of our own hearts.

In his letter to the Romans Paul puts it like this:

‘For since the creation of the world God’s invisible qualities—his eternal power and divine nature—have been clearly seen, being understood from what has been made, so that people are without excuse.

‘For although they knew God, they neither glorified him as God nor gave thanks to him, but their thinking became futile, and their foolish hearts were darkened.  Although they claimed to be wise, they became fools and exchanged the glory of the immortal God for images made to look like a mortal human being and birds and animals and reptiles.’
Romans 1:20-23

Just as mathematics reveals God’s glory, our response to maths reveals our hearts. Paul says that although we know the truth about God; although we can know some of what he is like though the world he has created, humanity naturally exchanges giving God praise for giving ourselves praise.

When we find ourselves doing that, we need to repent and turn back to God. Our maths exposes our need to look away from ourselves and to look to Him. When we get to the end of a problem, we can praise God that it is by his grace that we can see his beauty in maths. We don’t do maths for our own glory but for God’s.

So, what does the gospel have to do with mathematics? In a word, everything! This year as you learn more about mathematics, allow it to teach you the depth of Jesus’ Lordship over all thing (including maths)! Allow the challenges to remind you of our finite nature. And allow the joy of finishing a problem to point you away from yourself and to the beauty of God as we study mathematics for His glory.

Being a Christian in Mathematics, Christians in Science

Principles for the Christian mathematician 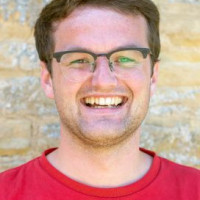 Sean grew up in Kent before moving to Nottingham to study for an MSci in Mathematical Physics. He now works as a Staff Worker supporting CUs in Nottingham and Lincoln.

View all resources by Sean Gavin