The standard assumption of our society is that science and Christianity do not go together. Either they are in direct conflict, as Dawkins and the New Atheists would have it, or at the very least they have nothing much to say to each other.

Alister McGrath is convinced otherwise, and this is his entry level book explaining how science and Christianity not only fit together but mutually benefit each other. With PhDs in biochemistry and theology, and as professor of Science and Religion at Oxford University, McGrath is admirably well-suited to this task and Enriching Our Vision of Reality provides a convincing and thought-provoking way of relating science and Christianity.

The book starts with a chapter setting the scene. McGrath argues that we all have a deeply human need for a big picture of everything, something that makes sense of all aspects of reality. Scientism sees science as the only method to find out truth, but this leaves us with a deeply limited view of reality. McGrath argues that reality is far too complex to only look at through one lens, we need multiple approaches, and crucially we need a big picture that makes sense of all these different ways of viewing the world and holds them together. This chapter is an excellent introduction, although it touches on lots of ideas without exploring any of them in-depth, which can be a little frustrating to read.

McGrath then spends three chapters telling the stories of a Christian chemist, Charles Coulson, a theologian with an interest in science, Thomas Torrance, and a physicist and Anglican priest, John Polkinghorne. These are all people that McGrath knew personally and have significantly impacted his own thinking. I particularly appreciated the chapter on Thomas Torrance, because I hadn’t come across a theologian without a scientific background who wrote significantly on science. Torrance saw an interest in science as essential for a Christian since it was God’s world and He has made us with minds that seek to understand it. McGrath’s summary has spurred me on to read more from Torrance on the sciences.

Finally the book has 6 chapters on different topics, with McGrath modelling how his approach to science and Christianity plays out in practice. The topics include how to think about theories of reality, the role models play in science and theology, and human identity. In these he critiques a reductionist view of reality that only accepts what science tells us, as preached by the New Atheists and holds out instead his view that science and Christianity give complementary pictures of reality that benefit each other.

This is a great book which covers a lot of ground but does so with a light touch and in a clear, engaging manner. Alister McGrath has clearly thought very deeply about this and his critique of the New Atheists' scientism is very strong. His own approach of science and Christianity providing different views of the same reality which cohere together is overall quite persuasive. My only quibble would be that I don’t think science and Christianity are on an equal level in viewing reality. Science limits itself to explaining the natural world in terms of natural phenomena, whereas Christianity provides the big picture view which explains science and motivates the scientific study of the world. But largely my approach is the one McGrath so ably lays out in this book.

My only other criticism would be that you often left wishing that McGrath would give you more on a particular point rather than moving on to something else. But I guess this is inevitable given his focus on being a popular-level book, and he does provide a further reading list if you want to consider these things further.

Overall, this is an excellent book which presents in a clear and engaging way a convincing model of how science and Christianity cohere together, providing a mutually beneficial and deeper vision of the world God has made. I would recommend it for all science students, whether Christians or not, who want to start thinking through these issues. 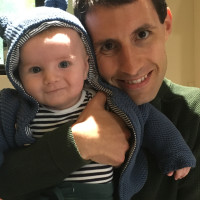 JJ studied physics at Durham University before moving to Newcastle to spend a year as a Relay Worker with UCCF. Since then he has been working for the NHS as a medical physicist, specialising in …

View all resources by JJ Wyatt