Can you be a proper scientist and still believe in God?

If we have a ‘God of the gaps’ does this mean science can push God out and eventually render him unnecessary?

Can we reconcile religion and science in today’s world?

These were the questions Lancaster University CU were asking recently as they invited students from all over the campus to explore the claims of Jesus. Where absolute truth is rarely accepted unless founded in science, it can be hard to see how everything can fit together. Are these claims really plausible in today’s world?

The Christian Union put on a series of lunchbars over the week exploring questions like: 'Science and the God of the gaps', 'Does God really exist or is God just a delusion?' and 'Is it possible to have a personal experience with God?'

Professor emeritus and former scientist, Chris Park, came and explored the place of God in a world where scientific discovery is progressing at a rate of knots to fill our gaps in understanding.

A worldview is a lens through which we view the world around us; it allows us to make sense of all we see and experience. It helps define who we are, how we think, and in turn how we behave.

The ‘God of the gaps’ is a common worldview to make sense of the things we don’t understand but the question is, what happens when the gaps in our understanding get smaller and smaller? As Chris opened up these questions, we were reminded that we all, believers and non believers, share the same physical world and so access to all the same evidence. It is the way we view this evidence that makes us differ. As we look at the world around us, we are all faced with questions of age and origin of the earth not to mention how we got to where we are today.

A.J. Ayer stated, 'the only meaningful statements are those used in science, logic, or mathematics. Statements in metaphysics, religion, aesthetics, and ethics are literally meaningless, because they cannot be verified by empirical methods. They are neither valid nor invalid.' But, as Professor Terry Eagleton argues, even science 'trades on certain articles of faith like any other form of knowledge… science, like any other human affair, is indeed shot through with prejudice and partisanship, not to speak of ungrounded assumptions, unconscious biases, taken-for-granted truths, and beliefs too close to the eyeball to be objectified. Like religion, science is a culture, not just a set of procedures and hypotheses.'

We all live in the same world, surrounded by the same evidence day by day, approaching it with our own prejudices and unconscious biases. As Christians, we have the lens through which the world makes sense as it was intended to be and with it, we can be sure that no new fact or discovery can be found to disprove the one who created it.

However, no matter how much empirical evidence we study about how things work, the one gap science and logic cannot fill is that of: why?

For that we must look beyond the creation to the Creator Himself.

The lunchbar was a fabulous way to be examining this with scientists all across campus engaging in these questions. At one lunchbar alone we had approximately 80 people, most of whom were guests with no CU or church background. Off the back of this, 10 guests indicated that they wanted to start our CU Alpha course to explore these questions further, and four of these indicated that they wanted to follow Jesus – what an answer to prayer!

Not only was it so encouraging to be bringing this to light to our non-Christian friends, it was also so important it is to be grappling with these issues ourselves! Our God is much more than a 'God of the gaps', He’s the God of the whole universe!

Could you and your CU put on a similar event? If you’re interested, chat to your CU committee and Staff Worker.

Example event: Am I just my brain? 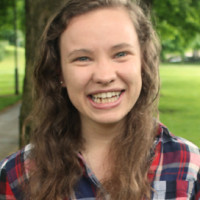 Abi is a CU Staff Worker at Lancaster University, where she was formerly a student and then Relay worker.

View all resources by Abi Andrews